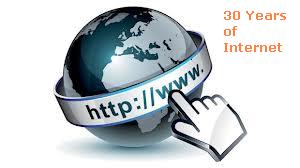 It is difficult to imagine a life without internet today. It has become such an integral part of our existence that whether it is for work, entertainment, shopping or socializing, we are dependent on internet. One can definitely say that within the short span of three decades of its being, internet completely has altered the way humanity interacts. And we at Vcare Software Development realize that had it not been for the internet and the consequent Information Technology revolution, even we could have not emerged as an offshore web development service provider.

Everybody knows (and if you don’t know then you can find out with a simple search on the internet) that internet was born on 1st January 1983. We briefly recapitulate the history for you:

But what really made the humanity connect with internet are the milestones which were achieved after we got internet. Some of these are:

In the coming years, there shall be more milestones for the internet. And even though it is just 30 years old, but it has enabled the humanity to leap 300 years ahead in time!

Tweets by @vcaresoftware Find me on Google